On the 26h of May, Portuguese newspaper O Jogo featured a story saying Chelsea are interested in Benfica midfielder Julian Weigl.

It was explained the Blues had already made an approach with the player’s representatives, as manager Thomas Tuchel is very fond of the 25-year-old’s qualities.

The newspaper is back today with a short update on the situation, this time pointing out how much Chelsea would need to spend to get the deal done.

They say Benfica have now set a price of €30m to let Weigl go this summer. That’s €10m than the €20m they spent to sign him from Borussia Dortmund in January 2020. 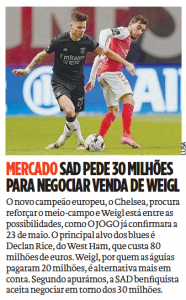 O Jogo once again say Weigl is seen by Chelsea as an alternative to Declan Rice. The West Ham player should cost €80m, so the Blues can knock on the Eagles’ door to get a cheaper option.

When reporting the interest initially, the newspaper claimed there should soon be some news on this pursuit. But now they don’t make it clear if Chelsea have taken any further steps, as the price set by Benfica is apparently all the outlet got to know for now.