Alex Telles is about to end another great season for Porto. With 13 goals and 12 assists, the Brazilian left-back has once again stood out for the Dragons, and continues to be followed by European giants.

Newspaper Record has a story about the player today where they say ‘everything indicates’ that his time at the club is about to come to an end.

The main reason for it is that Telles’ career is now managed by agent Pini Zahavi, who’s known for having a good relationship with Premier League sides. 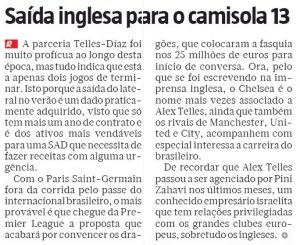 It’s Chelsea who’ve been the strongest club in the race for Telles, especially with reports from Portugal. However, this time, Record only says the Blues are those who’ve been most linked to the 27-year-old by the English press.

They also add that Manchester City and Manchester United have been following his career with a ‘special interest’ as well.

Even though the race for Telles looks big, Porto can’t demand a lot for his sale. That’s because his contract expires next year, and the Dragons can’t the the risk of losing him for free next season.

That’s why, according to Record, the club are asking for €25m, which is a fee the Stamford Bridge side should have no problem affording, especially if they can offload one of Emerson Palmieri or Marcos Alonso in the coming months.