In 2019, Chelsea have managed only two wins in the Premier League and have suffered defeats in the last three away matches, where they have also failed to find the back of net.

The Blues suffered a crushing 6-0 defeat at the hands of Manchester City at the Etihad on Sunday and after the latest loss, they dropped to sixth place in the league table.

Tuesday’s edition of AS has a story about the west London club’s manager, Maurizio Sarri with a headline that reads ‘Chelsea heavyweights do not want Sarri’.

It is claimed the former Napoli manager has lost the support of the key stars in the dressing room, and for months and the players have struggled to understand the coach’s methods.

The same has been reflected with recent performances and results and the report explains the relationship between Chelsea stars and Sarri is ‘irreconcilable’.

AS further claims the discontent among some players is such that they have already informed their agents they want transfers in the summer, if the Italian is still in charge of the club next season. 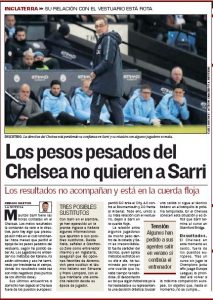 Chelsea are aware of the situation and the Spanish newspaper claims it is difficult for Sarri to finish the season with his current employer.

Sarri’s next big game is against Manchester United in the FA Cup clash on on February 18th and a defeat to the Red Devils at home could make things worse for him.