Chelsea’s N’Golo Kante is the only Premier League player to be named in L’Equipe’s team of the year. For weeks the French newspaper have been going through each position on the pitch and putting up arguments for which players should get in, and Kante has made it.

Choices such as Cristiano Ronaldo, Lionel Messi, Luis Suarez and Antoine Griezmann are pretty straightforward, but it’s the rest there’s likely to be some discussion over. Kante had an excellent case for inclusion, after helping Leicester City to the Premier League title last season.

At the time Chelsea were really struggling under Jose Mourinho, but under Antonio Conte and with Kante, Chelsea couldn’t be doing much better. At the same time Leicester City have clearly missed the French midfielder and the turn in fortunes of the two clubs shows just how important Kante is to a team.

A hardworking midfielder, Kante suits Conte perfectly, allowing the manager some more freedom with other players. 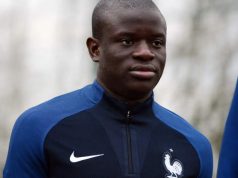 “The boy only thinks of Chelsea” – Agent dismisses transfer to specific club, not had any contact