Home Premier League Chelsea Chelsea have ‘softened’ position on transfer – Player could be set to...
SHARE

Earlier this week, L’Equipe explained Chelsea were blocking Tiemoué Bakayoko from returning to Monaco because they felt the principality club wouldn’t give him the exposure required to get his price up so they could sell him next summer, preferring a move to the Premier League (which would have to wait until January) instead.

We questioned that, since it was his time with his former club under Leonardo Jardim that helped his stock rise enough to get a move to Stamford Bridge in the first place, and it appears the Blues have since changed their mind a bit.

At least, that’s what the same L’Equipe are reporting on Friday, claiming Chelsea have ‘softened their stance’ regarding a loan to Monaco for the defensive midfielder in the past few hours.

In the meantime, the Ligue 1 club opened other avenues for reinforcements, including one for one of Bakayoko’s former teammates at Milan, Franck Kessie, and another for Leicester’s Adrien Silva. 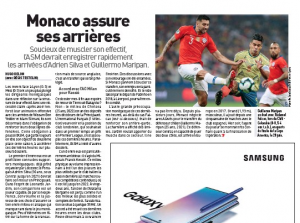 The latter’s arrival wouldn’t block the Frenchman’s potential spot at Monaco, but the same can’t really be said for the Ivory Coast international.

We’ll have to see what happens in the coming days, but it would be surprising to see both Kessie and Bakayoko arrive.

Then again, when Monaco are on a shopping spree like they are currently are, logic tends to go out of the window.