Home Premier League Chelsea Chelsea have ‘set aside €130m’ for transfers – Could ‘blow the bank’...
SHARE

Earlier today, it was reported by Gazzetta dello Sport that Romelu Lukaku had turned down a big offer from Chelsea to return to Stamford Bridge.

It was made clear by the Italian newspaper that the Belgian wasn’t entirely thrilled at the prospect of making a move back to England, where his last experience with Manchester United wasn’t as great as he would have hoped.

Furthermore, he’s really happy in Italy with Inter, having just won the Serie A title under Antonio Conte.

The manager has since departed, replaced by Simone Inzaghi, but that hasn’t diminished the player’s desire to stay, wanting to continue his progress there, away from England.

That being said, Chelsea have a lot of money to spare these days, as shown by their incessant pursuit of Erling Haaland, and Corriere della Sera explain they have ‘set aside €130m’ for transfers.

So far, Lukaku’s desire to stay has put a halt to the whole operation, and it’s that they need to overturn for a deal to go through. 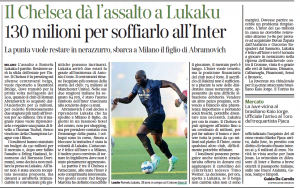 Should that happen, Inter, ‘like any other club, could hardly refuse’.

We’ll believe it when we see it, because Gazzetta, in their article this morning, made a very good point: until Chelsea have Lukaku’s yes, making an official makes little sense.

“It was impossible” – Director admits he could’t compete with Everton...