Benfica midfielder João Félix has finally signed a new contract with the Lisbon side. An official announcement has now confirmed the news from the last week, as the youngster has agreed a new deal until 2023 with a €120m release clause.

Now as the Portuguese media covers it today, there’s a Premier League side who get mentioned in a couple of stories. That’s Chelsea.

The Blues were linked to the player in the past few days, with older reports going back towards the beginning of the summer, and now the local media treats the new deal as a ‘message’ for those who are interested in him.

A Bola had already said that although Chelsea planned to ‘act quickly’, their efforts couldn’t stop Félix from signing the new deal. And Record now writes that this contract is a ‘warning’ for the Blues. 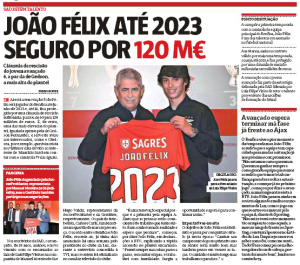 With the official announcement, both Félix and club president Luís Filipe Vieira have claimed that the plan is to keep the player at the club, make the squad stronger and try to win titles.

But we all know how Portuguese football works, and for Félix to leave, Chelsea would just have to offer the right amount. However, with this new release clause, his price has certainly gone up.