Unfortunately for Chelsea fans, this January window appears to be a bit of a mess from the club’s point of view, with Marina Granovskaia apparently going against Maurizio Sarri’s wishes when it comes to incomings.

Moves for both Nicolo Barella and Gonzalo Higuain are said to be stalling due to decisions made by Roman Abramovich’s right hand, while there’s also the Callum Hudson-Odoi situation to deal with and Cesc Fabregas’ constantly delayed move to Monaco.

Plenty to feast on and discuss there already, yet nothing is ever enough for the Italian media, and Corriere dello Sport now believe Chelsea, who already have Marcos Alonso and Emerson Palmieri in the role, are looking at a left-back.

This comes a few days after Roma were said to be interested in the Italy international, and it seems the Blues are looking at who they could replace him with should he leave. 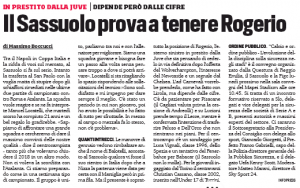 At least, that’s the only reason we can see why they would be interested in Juventus’ Rogerio, for whom Wolverhampton are said to have bid €18m.

Currently on loan at Sassuolo, the Brazilian defender could see his deal cut short if the right offer comes along, as the Serie A champions would be willing to cash in early on him, and Chelsea are said to be the latest to have sent a ‘signal’.

Whether that’s a text, someone’s waved or they’ve gone old school and are sending a message by wafting a carpet over a fire isn’t said, but clearly something has reached Corriere about the Blues and the defender.

As for Sassuolo in all this, they’d ideally like to keep him around beyond the loan.