Antonio Rudiger has been left annoyed by the terms Chelsea have offered him for his renewal, with the current offer a ‘slap in the face’.

That’s according to SportBILD, who confirm Bayern Munich are hovering in the background, ready to offer the German defender what he wants.

Rudiger is out of contract at Chelsea in the summer and so far hasn’t agreed an extension to his deal, something which hasn’t gone unnoticed around Europe.

He is being watched by multiple big clubs, who are ready to make their move in January should it become clear that Rudiger will be leaving Stamford Bridge on a free transfer.

Several reports have indicated he does not want that to happen, but currently, there is a divide between him and Chelsea, who are yet to offer him the terms he would like.

SportBILD back this up, stating the current offer has been like a ‘slap in the face’ for the defender.

They say that Rudiger is looking to earn €12m a year but has so far only been offered €8.5m by those in charge. That’s something he’s not happy with, particularly when the likes of Marcos Alonso is currently earning €6m a year after-tax. 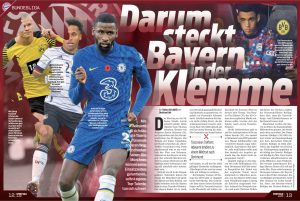 That’s led to the current contract standoff, and Bayern can ‘enter the poker game’ because they can ‘easily’ pay the €12m Rudiger is looking for.

The problem is that the defender isn’t all that keen on a return to his homeland and would prefer to stay at Chelsea as he feels ‘totally at home’ at the club and in London.

Bayern will presumably make their move regardless of that fact, with Chelsea needing another €3.5m if they are to keep Rudiger beyond the end of this season.