It’s no surprise that Chelsea’s Eden Hazard has been named in Gazzetta dello Sport’s European Team of the Week after scoring a hat-trick to help his side beat Cardiff City 4-1 at Stamford Bridge on Saturday.

The Italian newspaper has rated players’ performance in the last match they featured for the club and the Blues forward has been rated nine, which is the highest when compared with the other 10 players. It’s a very rare mark for Gazzetta.

Hazard has already taken his overall tally to five goals and two assists in 307 minutes played in the league and the Belgian international is enjoying his life at the west London club under new manager Maurizio Sarri.

They have scored 14 goals so far in the league and the Belgian international has been directly involved in 50 percent of them. 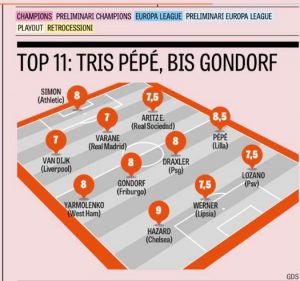 Chelsea are on top of the table with 15 points after five matches, sharing the same number of points with second place Liverpool, with the goal difference separating the two clubs.