Of course Chelsea would make an appearance in the Felipe Anderson saga.

It was as predictable as England going out of the World Cup on penalt…ah wait, we can’t really use that one anymore.

Either way, with West Ham and Lazio locking horns over a couple of million, Il Tempo report Chelsea have waded in, swinging their chequebook in the air to try and please their next manager Maurizio Sarri.

The Italian newspaper explain the Blues ‘have the intention of inserting themselves concretely in the race for the Brazilian’ and will soon offer €30m. 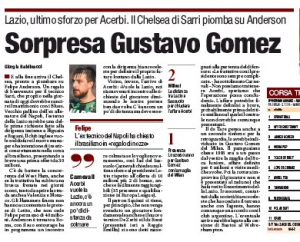 Of course, everyone knows that won’t be enough since Claudio Lotito has made it clear he wants at least €40m-45m for his forward, but you have to start somewhere right?

This would also put some pressure on West Ham, who seem reluctant to up their offer for a player they seemingly really want.

Could this all be a ploy by Lazio to unblock the situation? Telling the local media that Chelsea are ready to pounce to scare the Hammers?

This certainly wouldn’t be the first time a club will have used that tactic to get what they want.