Barcelona want to close their deal for Manchester City’s Eric Garcia as soon as possible as they fear a possible move from Chelsea for the defender.

Garcia has been linked with a move to the Camp Nou since last summer when Barcelona tried to get a deal done but failed to agree on a price with City.

It had been thought he would move in January, but again a deal failed to happen, this time because the Barcelona presidential candidates could not agree to sanction the move.

With Garcia available on a free in the summer when his deal at Manchester City expires, his move looked likely to happen, although Barcelona recently threw a spanner into the works by changing their contract offer.

They remain determined to get the transfer over the line, and Sport cover that today, throwing Chelsea into the mix as potential competition.

They explained that Barcelona want to close the deal for Garcia this month, with their last offer being sent at the end of March.

That offer was reformulated due to the financial situation at the club and, as a result, the Manchester City man asked for time to consider his options.

Garcia and his representatives could propose readjustments to reach an agreement, but it is ‘clear’ they will have to accept Barcelona’s ‘conditions’ if he is to make a return to the Camp Nou.

The Blaugrana club don’t want to wait too long, though, in case of ‘interference’ from other clubs, namely Arsenal and Chelsea. 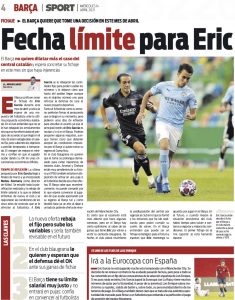 The Premier League duo are ‘very aware’ of the defender’s future and would be in a position to ‘enter a bid’ if the footballer ‘decides to listen to offers’.

Barcelona know that in that situation, they cannot compete economically, and so they are hoping to convince Garcia to choose them, as he did a year ago when he rejected a renewal offer from City.

The whole affair is ‘more open’ than it once was, but the Catalan giants have a ‘certain optimism’ that Garcia will pick them because they are aware ‘how eager’ he is to return to the club.

The competition is there, though, with Chelsea waiting in the wings should the centre-back decide to look elsewhere.