Every day, there’s at least one line in one of the Italian newspapers about their interest in Gary Cahill or Andreas Christensen, but most of the time, it’s about Cesc Fabregas.

Out of all the Blues want away players, the Spaniard appears to be the more solid target, and Milan are still working hard on convincing those in charge at Stamford Bridge to let him go for less than the demands.

Meetings have taken place, attempts at lowering fees are ongoing, yet Chelsea seem to refuse to budge from their €10m price tag, considered ‘a bit much’ for a 31-year-old whose contract is running out. 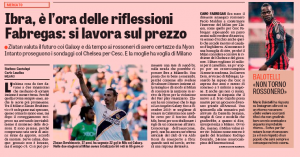 Yet, in all of this, there might be a key figure no one saw coming, and that’s Fabregas’ wife, Daniella Semaan.

According to Gazzetta dello Sport, she  ‘would value an experience in Milan’.

However, the Serie A side aren’t holding their breath just yet, working on other avenues just in case nothing comes from their attempts to get Fabregas in January.

It seems we’re still a long way away from an agreement, but if the midfielder’s wife has a preference, he might just sway in that direction.

Gazzetta may well be wheeling a little sexism here. Assuming all women would love to live in Milan given the shopping opportunities, but then London isn’t really so bad for that.