Home Europe Chelsea player’s future will be determined in next ‘few weeks’, already in...
SHARE

Cesc Fabregas’ contract at Chelsea will run down at the end of the season and he hasn’t yet signed a new deal to extend his stay at Stamford Bridge beyond 2019.

The Spaniard last featured for the Blues in his side’s defeat to Manchester City in the Community Shield clash and is still recovering on the sidelines from the knee injury he picked up at Wembley in August.

Italian newspaper Corriere dello Sport claims the former Arsenal man has entered AC Milan’s ‘orbit’ as they are aware of his qualities, having chased him for more than a decade now.

Maurizio Sarri allowed Tiemoue Bakayoko to join the Rossoneri on a loan deal with an option to buy and the Frenchman’s deal has helped the two clubs enjoy a good relationship.

The San Siro club’s general manager, Leonardo, now wants to take advantage of the situation to make an approach for the ex-Barcelona player. 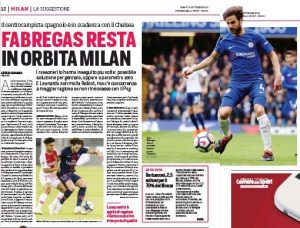 Sarri already has the services of N’Golo Kante, Jorginho and Mateo Kovacic and it is still not clear if the 31-year-old will be used regularly once he regains full fitness.

The report mentions Fabregas’ future will be determined in the next ‘few weeks’ as he will find out if he will be included in the former Napoli coach’s plans at Chelsea or not.