Chelsea took Mateo Kovacic on a dry season-long loan deal from Real Madrid before the start of the season.

In December, we relayed news from Spain that the midfielder is happy at Stamford Bridge and is open to the idea of continuing with the west London club beyond this campaign.

However, FIFA have handed the Blues a ban from registering players in the next two transfer windows, meaning the Croatia international will have to return to the parent club once his deal expires… unless there’s a reprieve.

After leaving Los Blancos last summer, Zinedine Zidane was reappointed as the Spanish capital club’s manager on Monday. Under the guidance of the Frenchman, the 24-year-old struggled for regular minutes, which is why he wanted to leave the La Liga giants.

Tuesday’s edition of AS takes a look at what would happen to those players who are currently out on loan and Kovacic also gets a mention. 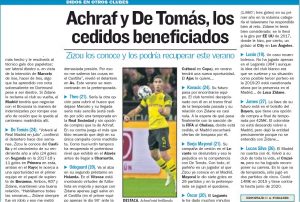 It is claimed the player’s relationship with Zidane is ‘almost non-existent, which is why Kovacic’s future will be finding a new club in the summer.

AS also claims that Real Madrid are willing to listen to offers for him, meaning he’s more likely to play for a new club next season.