Third division side Royal Stadium Brainois’ will take on Club Tubize in the cup competition on Saturday.

Chelsea star Eden Hazard’s father, Thierry was working on the preparing Royal Stadium Brainois’ pitch for the weekend clash and Belgian newspaper Het Nieuwsblad were provided an opportunity to interview him on Wednesday.

Hazard sr spoke on various topics, including the speculation linking Eden to Real Madrid. It is not the first time the 27-year-old has been rumoured to interest the club.

Not just this year, but over the years, the Belgium international has been on the radar of the La Liga giant. Thierry has revealed he is unaware as to why his son’s move to the Santiago Bernabeu did not shape last summer.

“I can’t say why it didn’t happen. Not because I don’t want to, but because I don’t know. Maybe they have a policy where they wanted to give the young players a chance. Eden will have one year on his contract next summer, but it is possible that he will never play for Real,” Thierry said.

Zinedine Zidane was reportedly an admirer of Eden. The latter’s father believes the Frenchman’s exit from the Spanish capital club also had an impact on the Blues forward’s chances of joining Real Madrid. 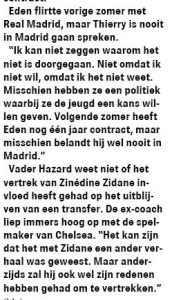 “It could have been a different story with [if] Zidane [had stayed], but on the other hand, he had his reasons to leave,” he explained.