With January looming and Chelsea now open for business, most are expecting them to be busy signing players.

However, their new freedom also means that they can let players go and one such player is striker Olivier Giroud.

The Frenchman has barely featured under Frank Lampard this season and with the Euros next summer and a place in France’s squad not guaranteed, that needs to change.

He has subsequently been linked with a move away from Stamford Bridge and L’Equipe report that is definitely on the cards.

At first, he intended to stay at Chelsea and fight for his place as he was convinced that things would turn around, and the situation would become ‘favourable’ over the busy Christmas period.

However, that has not happened, and he is now actively looking for a move away, and according to the newspaper, a move to Inter Milan ‘seems to be taking shape’.

They are the club that can offer him both sporting and financial guarantees. While he will be behind Romelu Lukaku and Lautaro Martinez, there’s a higher probability he’ll get game time in Italy than England. 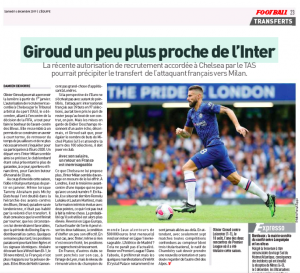 French clubs had looked into signing him, for example, Lyon, but his high salary made a move there ‘unthinkable’. Atlético Madrid are also not keen.

Giroud would prefer to stay in the Premier League and Crystal Palace have shown interest, but they have never taken it further than that.

As a result, Giroud is left with Inter Milan as the best opportunity he’s got to get the game time he’s simply not getting at Chelsea.