César Azpilicueta is out of contract at Chelsea at the end of the current season and has been linked with a move away from Stamford Bridge.

Barcelona are among the clubs said to be keen to take the defender on a free transfer next summer.

On Tuesday, El Chiringuito journalist Jose Alvarez stated Thomas Tuchel’s star has a deal ‘practically done’ with the La Liga side and only small details are left to be sorted out.

Mundo Deportivo on Wednesday waste no time in dismissing these claims and adds the 32-year-old has ‘not yet decided’ his future.

The Spain international’s quality, experience of playing at the highest level and ability to play as a fullback or in the middle of the back four makes it ‘very appealing’ to Barca’s technical leaders.

In addition to this, the possibility to sign Azpilicueta for nothing next summer makes him an even more interesting option for the Catalan club. The Blues defender, however, has not made a decision on where he will play next season. 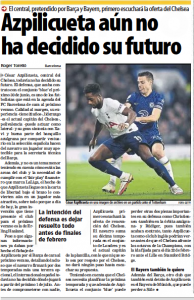 ‘Before committing to anyone’ else, Azpilicueta will ‘first listen to Chelsea’s renewal offer’.

He is in his 10th season with the west London club and is currently their captain. Out of respect for the Premier League side, the Spaniard will not take any steps until he listens to the Champions League winners’ offer.

Mundo explain Barcelona are not the only club behind Azpilicueta as Bayern Munich are also keeping tabs on the Chelsea captain.