On August 4th, we carried a report from Marca, who claimed the ‘time is running out’ for Real Madrid to secure the signing of Chelsea goalkeeper Thibaut Courtois.

That’s because the Blues won’t let him go until they get a replacement.

The Belgium international has one year left on his contract and has already rejected an opportunity to sign an extension because he wants to return to Madrid so that he can be closer to his children.

Today’s edition of Mundo Deportivo claims the Champions League winners want to close the goalkeeper’s signing in the next few days. The former Atletico Madrid man has a ‘total agreement’ with Julen Lopetegui’s side, as the La Liga giants are ready to offer €34m to the Blues to secure their player’s services.

Courtois is ‘pushing Chelsea’ to accept the Spanish capital club’s offer, but the FA Cup winners will only allow their shot stopper leave once they get that replacement. The transfer window in England closes on August 9th and the west London club still cannot find the man they want. 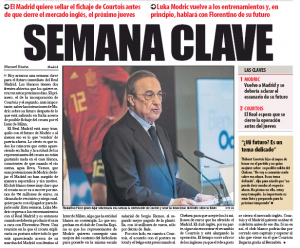 Real Madrid and the 26-year-old want to end the ongoing saga and a failure from the former to bring the goalkeeper to the club will see them sign Courtois on a free transfer next summer.