According to the outlet, Chelsea defender David Luiz is keen on returning to the Lisbon side, who he defended between 2007 and 2011.

Correio da Manhã claims that the player has spoken to the Benfica board himself, and expressed his will to wear the Eagles’ shirt again.

However, even though the club directors becamse pretty excited with the news, they are aware that this is a very unlikely move to happen, especially because of the big costs the transfer would have. 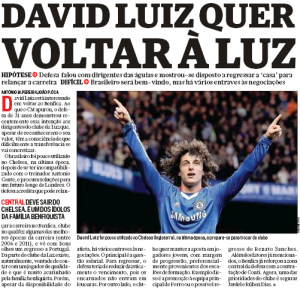 Another problem David Luiz would find is that he doesn’t suit Benfica’s market plans.

They want to give their homegrown players some priority, and have already signed defender German Conti from Atletico Colon as well.

So as funny as it may sound, Chelsea’s David Luiz wants to return to Estádio da Luz, but the doors aren’t so open for him.