During an interview with Onda Cero this week, Florentino Pérez publicly revealed he has been trying to sign Eden Hazard for Real Madrid for some time.

The Chelsea star has been one of the key targets for the 13-time European champions this summer as they look to strengthen the squad for next season after a disappointing campaign.

He and his side will face Arsenal in the Europa League final in Baku later today and the clash is expected to be the Belgium international’s final appearance for the Blues.

Wednesday’s edition of AS claims the Chelsea forward is set to complete a switch to the Santiago Bernabeu after the final and wants to say goodbye the west London club’s fans by helping them win the second tier European competition.

It’s claimed the player is expected to presented to the Real Madrid fans next week, provided there are no setbacks.

AS are very precise here as they state that Zinedine Zidane’s side are planning to present the 28-year-old on Monday, June 3rd. 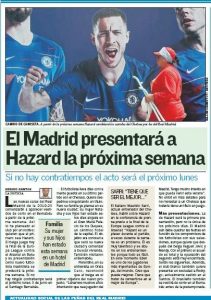 Hazard’s wife and his children are already staying in Gran Meliá Palacio de los Duques, a hotel in Madrid. Their objective is to know the city well and also look for houses.

With one year left on Hazard’s contract at Stamford Bridge, it looks like Chelsea have decided to cash in from his sale in the summer.