According to Wednesday’s edition of AS, the 28-year-old has been offered two opportunities to commit his future to Stamford Bridge beyond 2020.

However, the forward has rejected signing an extension on both occasions and in the last few days, he made it clear to France Football he’s still open to the idea of joining Real Madrid.

The Spanish newspaper’s report claims the Blues star is a ‘clear goal’ for Los Blancos along with Christian Eriksen of Tottenham Hotspur.

Hazard takes ‘advantage’ of any occasion provided to him to express his desire to join the Champions League winners.

By doing this, Hazard is meeting Real Madrid’s condition of a player publicly expressing his desire to join them, which he’s been doing for the past two years.

The former Lille man agrees the conditions for salary set to be offered by the Spanish capital club, but the player is ‘disturbed’ and nervous by the silence of the La Liga outfit. 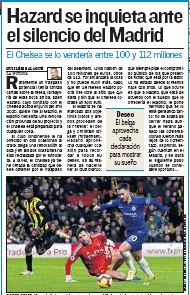 Last summer, talks went ahead, but no deal took shape and AS claims the 13-time European champions will take the necessary steps to sign him, if and when deemed appropriate.