With Dalbert on his way to Rennes for the season, Inter have space for a new left-back, and Antonio Conte wants Marcos Alonso.

The Italian manager has already worked with the Spaniard at Chelsea, and with a need for an extra man in his Serie A squad, the former Juventus coach has set his eyes on his former pupil.

The problem, according to Gazzetta dello Sport, is that the Blues aren’t interested in loaning him.

At least, they weren’t ‘last night’, meaning Thursday, which is frustrating for both Beppe Marotta and Piero Ausilio, who don’t have the money to pay for a direct transfer.

Alonso is said to be ‘pushing for the Nerazzuri solution’, suggesting he isn’t all that pleased with the fact he has to compete with both Ben Chilwell and Emerson Palmieri for a starting job under Frank Lampard. 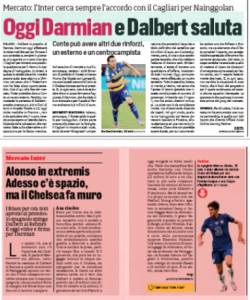 Corriere dello Sport see it differently, claiming Conte would actually prefer to work with the Italy international instead of Alonso, but the fact the Spaniard has fallen out with Lampard means he’s also an option.

Either way, they hold the same stance as Gazzetta, which is that until Chelsea are open to a loan deal for their left-back(s), nothing can be done.