Home Premier League Chelsea Chelsea player had ‘one foot on the plane’ on Thursday night –...
SHARE

It appears that today is the day Fikayo Tomori will finally leave Chelsea on loan for Milan.

After a week or so of very little happening other than the two sides squabbling over the amount of the option to buy, the Englishman will finally get his wish of heading to a club where he is expected to get minutes on the pitch.

In fact, the idea from the Serie A side’s end is to get him to Italy on Friday in hope that he can be part of the squad against Atalanta on Saturday.

That’s according to Gazzetta Dello Sport, who explain the ‘white smoke’ arrived after dinner on Thursday evening, although that left it too late to get documents in order.

Tomori has had ‘one foot on the plane’ since yesterday, as he’s ‘impatient’ to see the deal done, although he still has to ‘undergo a cumbersome procedure now that he’s a fully-fledged non-EU citizen’ due to Brexit. 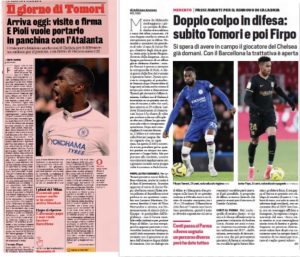 As for the price of the option to buy, ‘it has fallen below €25m’, which is finally also corroborated by Corriere dello Sport, who state it will ‘fluctuate around €25m’.

This is all despite Frank Lampard ‘strongly believing’ in the defender, whom he considers a ‘prop for the future’ at Stamford Bridge.

However, Milan’s insistence on having the option to make the move permanent has prevailed, and ‘Tomori day’ is now underway at San Siro.