Borussia Dortmund have identified Chelsea’s Timo Werner as one of four options to replace Erling Haaland.

That’s according to SportBild, who say the Blues forward is the ‘most surprising solution’ for the German club.

Haaland attracted interest in the summer, but BVB were reluctant to let the striker leave. There’s a possibility the current campaign will be the Norway international’s last season with the Bundesliga side.

Marco Rose’s side are already looking at players who can replace the 21-year-old and Bild say the Germany international would be the right fit for Rose’s style of play at Dortmund.

The 25-year-old has failed to make a mark since joining the west London club in 2020, and has been restricted to nine minutes of action since starting against Crystal Palace last month. 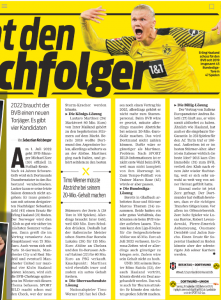 The player will have to take a ‘massive’ pay cut if he were to move to Signal Iduna Park.

Bild, however, state the Chelsea attacker is not the first-choice target to replace Haaland as BVB are ‘not completely convinced of him’.