It feels that not a day goes by without Emerson Palmieri being linked with a move back to Italy, all starting from the minute he left Roma to sign for Chelsea.

That is, of course, an over exaggeration, and yet we find ourselves with yet another suggestion the player could reunite with Maurizio Sarri at Juventus.

Despite being bought by Antonio Conte when he was in charge at Stamford Bridge, the defender found his way blocked by Marcos Alonso, and it wasn’t until the former Napoli manager took over that he found a new lease of life in London.

That has continued under Frank Lampard, and the rumours haven’t gone away. 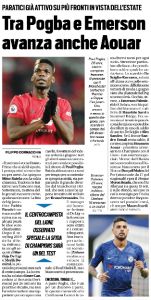 Tuttosport on Friday explain the defender is ‘highly regarded’ over at Juventus, who could make a move if one of either Mattias De Sciglio or Alex Sandro were to leave in the summer.

The former of the two came close to doing so in January, with a swap for Paris Saint-Germain’s Layvin Kurzawa crumbling at the last hurdle, and the Brazilian has often been touted for a move elsewhere, namely the Premier League.

There’s no guarantees here, but he remains on their list, which is unlikely to change anytime soon.