Home Premier League Chelsea Chelsea player has given ‘green light’ for transfer to go through –...
SHARE

With the Euros starting in less than a week, a lot of footballers will want to know what their future is made of before the competition starts.

Olivier Giroud falls into that category, currently on his way out of Chelsea as his contract expires at the end of the month, and Milan pushing to try and sign him on a free.

It was explained on Thursday that the France international was edging towards the San Siro club, as he would play a far more important role there than at Stamford Bridge, where Marina Granovskaia and co. were trying to get him to renew. 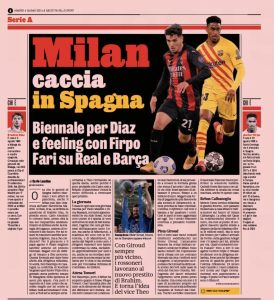 Giroud, down his end, has given the ‘green light’ to Milan, and ‘everything points that the operation will be closed with a two-year contract of €4m/season’.

It’s stated Tuchel ‘wants to keep’ the Frenchman around but he ‘prefers the Italian solution’, and the newspaper believe the player is ‘getting closer and closer’ to signing for the Serie A side.