Maurizio Sarri left Chelsea to take the managerial role at Juventus in the summer and was replaced by Frank Lampard at Stamford Bridge.

In the second half of last season, Sarri preferred Emerson Palmieri ahead of Marcos Alonso in the left-back position for the Blues.

According to Calciomercato, the Serie A winners have made Emerson ‘one of the priorities’ to strengthen their left-back position as their manager ‘greatly appreciates’ the fullback’s defensive and offensive qualities.

The report doesn’t specify if the Old Lady are considering making an approach for the player in January or next summer.

The 25-year-old’s current deal with the Europa League winners runs down in 2022 and earlier reports from Italy suggested the defender is close to signing a new deal at the London club.

In addition to this, Emerson has also admitted a rise in racial abuse towards Serie A players made him reject an opportunity to return to the league in the past.

It will be another factor he will have to consider if Juve make an approach for him. 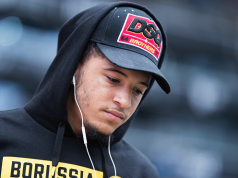