Fanatik report among the players being linked with a move to Fenerbahce this summer, Chelsea midfielder Marco van Ginkel remains the closest to be transferred to the Turkish giants

Van Ginkel is not expected to continue his career at Chelsea and Fenerbahce seems the strongest candidate to sign the player.

Recently installed Fenerbahce manager Phillip Cocu reportedly wants to work with the Dutchman after the pair enjoyed a title-winning season together at PSV Eindhoven in the last campaign.

Van Ginkel scored 14 goals for the Dutch side last season and was made captain, despite being on loan. 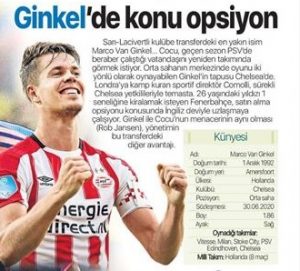 According to Fanatik, Fenerbahce sporting director Damien Comolli is in constant contact with Chelsea officials regarding Van Ginkel and the only issue is the right of redemption clause.

It’s reported the Turkish club are looking to insert a redemption clause in Van Ginkel’s contract and the fee has yet to be agreed with Chelsea.

The midfielder has two years left on his contract with the Premier League club.