Continuing his tradition of scoring when given the start, Olivier Giroud remains a very strong option for Frank Lampard at Chelsea.

That being said, the fact there was 13 days between his last two appearances most likely won’t have made him the most festive player in the squad, especially when having to sit out the game against his former side Arsenal, which the Blues ended up losing 3-1.

Contracted at Stamford Bridge until the end of June 2021, Giroud will be free to talk to clubs for a free transfer come January 1st, and yet there is also the possibility of him leaving earlier for a small fee.

That’s what Gazzetta dello Sport hint at on Tuesday when looking at Inter’s plans for the upcoming transfer window, where Antonio Conte still wants an extra forward. 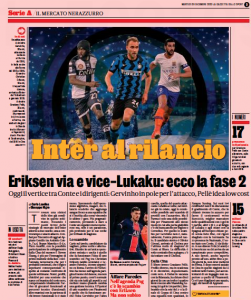 Gervinho, currently at Parma, is an option, but he isn’t the only one, with the Italian newspaper explaining the ‘historic candidate’ remains Giroud, such is the manager’s affinity for the Frenchman.

There is a ‘difficulty’, however, which is the fact he’s ‘under contract until June’, meaning there is the need to ‘negotiate with Chelsea’ regarding a potential move in January.

Considering there’s also Graziano Pellè available on a free, the idea of having to chat with Marina Granovskaia doesn’t seem to appeal all that much, so we’ll have to wait and see what Inter decide to do.