Olivier Giroud has made only two starts in the league this season and his last appearance for Chelsea came in his side’s 1-0 defeat to West Ham United on November 30th.

His limited playing time could jeopardise his chances of making it to the Euro 2020 with France.

The 33-year-old recently spoke to Le Dauphiné Libéré and explained a return to his homeland in the winter market is a possibility.

L’Equipe once again relays that a lack of appearances for Frank Lampard’s side weakens his position with the national team.

He first arrived in England when Arsenal signed him from Montpellier in 2012 and the newspaper takes a look if there’s any chances for him to return to his former club. 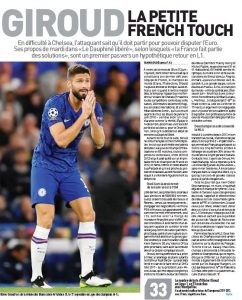 It’s claimed the World Cup remains attached to his former employer and is ‘close’ to the Ligue 1 side’s president, Laurent Nicollin.

The report further adds the player talks to Nicollin ‘regularly on the phone’.

However, L’Equipe make it clear Giroud will not return to Montpellier in January, but they don’t provide an explanation as to why there’s no chance for Giroud to go back.