With the transfer window coming to an end, clubs are starting to scramble about trying to make last minute deals to bolster their squads to help with a difficult season ahead.

Juventus are one of those, and an area they require help with is left-back.

Andrea Pirlo is without Alex Sandro for a month or so, and with little viable backup in the role, his eyes have turned to Chelsea’s Emerson Palmieri.

The Italy international has long been linked with a return to Serie A, but regardless of how many stories are written, he remains put at Stamford Bridge for now.

That could change in the next week or so if things come together, as Palmieri is described by Gazzetta dello Sport as ‘missing’ his previous country of residence and ‘would come back in a hurry’.

He needs a serious offer for that, and Andrea Paratici, the man in charge of transfers in Turin, has ‘tuned in’ with Chelsea regarding a move. 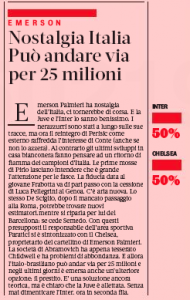 The Blues are slightly overcrowded in the role following the arrival of Ben Chilwell from Leicester City, and are willing to let Palmieri go for €25m.

However, ‘in recent days another option has emerged: the loan’.

As things stand, ’it’s still a theoretical solution, but it is clear Juve are enticed’.

One to keep an eye on as we near October 5th.