Coming back to the fore on Monday, the idea that Marcos Alonso could leave Chelsea in January continues to rumble on in the Italian media on Tuesday.

The idea would be for him to move to Inter, as Antonio Conte likes what the Spaniard has to offer, originally signing him from Fiorentina when in charge at Stamford Bridge, and with a need for depth at the left-back position at the San Siro, he fits the bill perfectly.

What helps his cause, as Gazzetta dello Sport put it, is the fact he’s become a ‘shadow’ under Frank Lampard, as he’s failed to feature in the past six Premier League games.

It’s stated the player, who will be wanting to play as much as possible, ‘can immediately push’ for a move to Inter, ‘perhaps on loan’, in January.

However, a lot could depend on what happens with Emerson Palmieri, with Juventus ‘putting their fingerprints’ all of him. 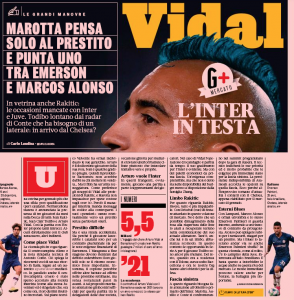 The Italian-Brazilian is, however, more of a regular than Alonso, and there’s been a lot of talk of him  getting a new contract at Stamford Bridge, suggesting he’s far more important to Lampard’s plans than his teammate.

For Inter, it seems Alonso is the easier option, but they might need the former Bolton man to push a bit to get something done.