On November 22nd, Mundo Deportivo explained Chelsea’s Andreas Christensen has emerged as a transfer target for Barcelona and they have ‘accumulated many reports for a long time’ about the defender.

The Spanish champions have been linked with the 23-year-old in the past as they tried to sign him in January 2019. However, no deal took shape and they ended up signing Jean-Clair Todibo and Jeison Murillo (on loan from Valencia) in the same window.

Friday’s edition of AS claims Barca’s transfer plans 2020 include bringing in young players and also finding a ‘apprentice’ for Gerard Piqué.

Piqué will turn 33 in less than a month and this, coupled with concern over Samuel Umtiti’s fitness and Todibo’s failure to convince Camp Nou leaders, has seen the La Liga winners make signing a centre-back a priority.

Christensen is back on Barcelona’s radar as AS reports he’s one of the players being monitored by the La Liga winners’ technical leaders. 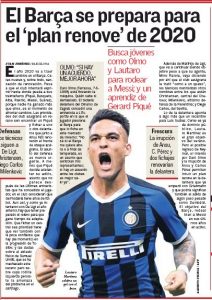 The Denmark international has started in eight league matches and has not featured for Frank Lampard’s side since the Blues 3-1 defeat to Everton on December 7th. His contract at Stamford Bridge expires in 2022.