While everyone else at Chelsea is celebrating Tammy Abraham’s rise, Olivier Giroud is likely to be feeling a little bitter.

The Frenchman has found himself relegated to a substitute role at Chelsea this season, managing just six appearances and 211 minutes so far.

It’s a situation he’s made it clear he’s less than happy about, and there have been plenty of suggestions he will be on the move come the January transfer window.

L’Equipe cover his situation today from the perspective of the French national team, and it’s once again pushed that Giroud could seek a move.

The newspaper explains that while Giroud is likely to be called up by Didier Deschamps again after his performances in the last international break, his ‘precarious situation’ at his club will not be able to ‘stretch’ any longer.

This is something Giroud is aware of, and the January transfer window will be ‘decisive’ in terms of him going to the Euros next summer.

Unfortunately for the player, he does ‘not have all the cards’. Instead, his future will be solely decided by Chelsea boss Frank Lampard. 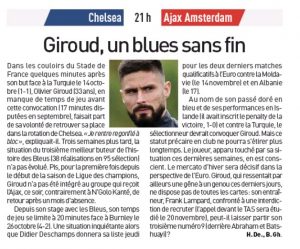 If Chelsea’s transfer ban is not overturned, he may decide to keep Giroud as his number three behind Abraham and Michy Batshuayi. If the CAS overturns it, Giroud may get his wish and move on.

Either way, it seems he and the club will be butting heads on the situation before too long, with him desperate to ensure his position in the France squad for next summer.