Everything is done on Cesc Fabregas to AS Monaco, apart from one thing.

L’Equipe report again on Tuesday that the Spaniard arrived in the French principality on Sunday with his agent Darren Dein. Personal terms had already been discussed and were confirmed between the parties, without too much of a problem.

On Sunday the French newspaper reported Chelsea have been asking for €10m and Monaco didn’t want to go to that amount, hence there being a delay. On Monday they again reported a disagreement on valuation.

In their Tuesday edition, there’s an interesting change. It’s stated Fabregas’ transfer is ‘valued at €10m’, making it sound like Monaco will be paying that amount, with it then explained they won’t overpay to rush things.

The hold-up now is Chelsea finding themselves a replacement, with Maurizio Sarri making it clear he needs one. 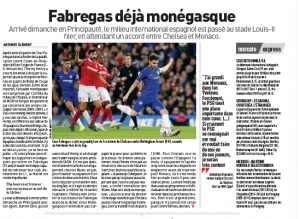 According to the claims, Fabregas visited Monaco’s stadium on Monday and even went through a ‘photoshoot’, meaning that once Chelsea say so, the club can announce everything and be prepared.

A medical was ‘on the agenda’ for Monday, and L’Equipe believe the move should be official ‘in the coming hours’. That would suggest Sarri is also close to bringing one in.