After a year of sporadically featuring for Chelsea and with Frank Lampard seemingly uninterested in using him regularly for the 2019-20 campaign, Davide Zappacosta decided it was best to go out on loan in Italy somewhere.

Lazio were linked for a bit, but AS Roma were eventually the lucky recipients of the right-back, who is initially joining on a six-month loan because of the Premier League club’s transfer ban situation, with an option for the clubs to extend it until the end of the season if needs be.

The club’s team manager, Morgan de Sanctis explained it was likely Zappacosta would see out the season in Rome, and Corriere dello Sport believe the player is even pushing for more.

In an article in their Friday print edition, the Italian newspaper claim the full-back has ‘already manifested his intention of staying’ in Italy’s capital beyond the 2019-20 campaign. 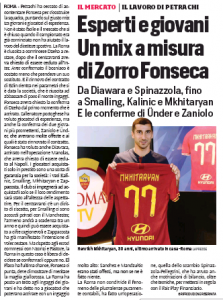 With no option to buy in his loan, that is a decision that will need to be made after some negotiations between the two sides, but if he performs well and Chelsea don’t need to recall him in January, it seems unlikely Lampard and co. will stand in the way of making money from an unwanted player.

Arriving at Stamford Bridge back in 2017 for £22.5m, Zappacosta only made 52 appearances in two whole seasons, scoring two goals and assisting teammates four times.