Chelsea are one of multiple Premier League clubs who are working to tempt Ronald Araujo to turn his back on Barcelona and move to English football, report Sport on Sunday.

The 22-year-old Uruguay international is now a regular for Xavi Hernandez’s side, but his contract is still the same as it was when he was playing for Barcelona B.

That contract expires in June 2023, and the Catalan side have been working on a renewal for the central defender. However, what they’ve offered him is far below other players around his age in the first team squad.

According to the report, Araujo doesn’t expect to be one of the highest paid players at the club, but he does expect more than he’s been offered.

This situation gives the chance for other clubs to move in, and Sport say Barcelona are aware that Premier League clubs, 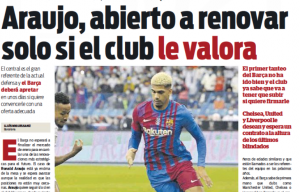 including Chelsea, have called the player to find out his feelings about a move in the summer window.

At that time the defender would have less than a year left on his contract, if he doesn’t renew, which would put the pressure on.