Gaël Kakuta arrived at Chelsea with great fanfare, and some controversy added too.

Lens felt the young Frenchman had walked out on a contract and Chelsea had played a big part in that. Initial proceedings saw the youngster banned from playing and Chelsea receive a transfer ban.

Chelsea furiously appealed and won out in the process, with both sets of sanctions lifted. But for Kakuta the hype had been built. A boy who hadn’t been chasing the limelight was suddenly expected to become one of the world’s best footballers, and there were many wanting him to fail.

He did fail, and went out on six loans from Chelsea, unable to get the form, and keep it, which would justify some of the early claims.

Now on loan with Amiens from Hebei China Fortune, Kakuta is playing well, and those who know the footballer best believe it’s because he’s happy.

Chelsea recruiter Guy Hillion has been speaking to L’Equipe as part of a feature on Kakuta and explained just why, in hindsight, Stamford Bridge really wasn’t the right kind of environment: “This exceptional talent he’s always had, the difference is that before he showed it occasionally.

“Gaël was exposed very young, his entourage saw too much, too quickly. What he needed today was a lower-rated club, a family setting. A context for him to feel loved. Because his professional story is intimately linked to his personal life. This need for recognition born of this absence of the father, this need of love is essential.” 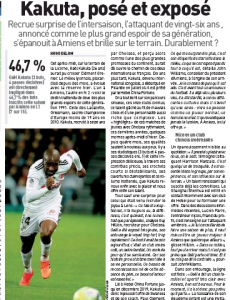 Chelsea isn’t really the right place for that, especially when the six loans are considered.

John Williams, who advised Amiens on the recruitment, added: “I’ve known him since he was a teenager. He is above all a football lover. He has already lived several lives, he was made a star, he knew different cultures but had only one desire: to live his passion as a normal player, a normal man. He will never chase the limelight. In Amiens, we offer him that.”

Now 26 years old, Kakuta has plenty of time to settle down to the football life he always wanted.