Home Premier League Chelsea Chelsea have offers in for two signings – Both proposals attractive to...
SHARE

Chelsea have offers in for two Barcelona players, according to two separate articles from Catalan newspaper Sport.

In their Wednesday newspaper, Sport take a look at Ousmane Dembele’s situation, and they make it clear that Barca aren’t prepared to submit a new renewal proposal. Should the Frenchman want to stay at the Camp Nou then he’ll have to accept what has already been put forward, with previous reports saying that includes a pay cut.

Sport say Dembele has ‘succulent’ proposals from Chelsea and Newcastle United to consider, should he want a move to the Premier League as a free agent in the summer

It’s not thought that the player has yet given his approval to a move anywhere, and is still in the long process of making his mind up.

The other Barcelona player who Chelsea has put an offer forward to is Ronald Araujo, with Sport saying the defender is of interest to both Thomas Tuchel’s side and Manchester United.

PSG are also said to have come forward. 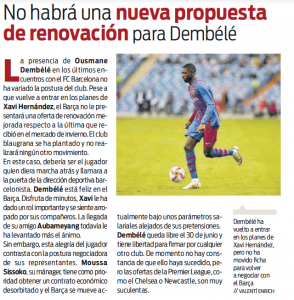 Chelsea are offering more than the Blaugrana want to spend on a renewal, and would either be willing to pay a fee this year or wait until Araujo is a free agent at the end of next season.