Home Europe Chelsea could be offered one of three players, with Kia Joorabchian involved
SHARE

Chelsea star Willian has been linked with a move away from Stamford Bridge, with Barcelona believed to be interested in the player.

On Monday, we carried a report from Mundo Deportivo, who claimed the Brazil international’s “old dream” is to play for one of the two Spanish giants – Barcelona or Real Madrid. However, the FA Cup winners are demanding €80m to sanction his sale.

Today’s edition of Catalan newspaper Mundo Deportivo claims the La Liga winners will only consider signing Willian if the Blues reduce their asking price, but there’s a plan to help that happen.

Barcelona are open to the idea of including one of their players as a part of the deal in signing Willian. They will include a player who is not in Ernesto Valverde’s plans, but will be “worthy” for Chelsea.

Andre Gomes and Rafinha no longer have futures at the Camp Nou. The latter spent the second half of the last campaign on loan at Inter Milan and the Nerazzurri have refused to sign the Brazilian on a permanent transfer.

We’ve already covered claims about Paulinho open to the idea of leaving Barcelona this summer. The former Tottenham Hotspur midfielder, along with Gomes and Rafinha are all available in the transfer market. 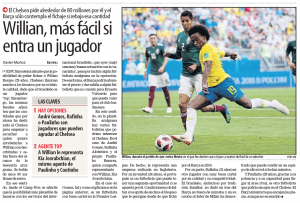 Mundo claims the Spanish champions could offer one of the three players to Chelsea in order to bring Willian to the Camp Nou.

Paulinho’s agent is Kia Joorabchian, who also represents Willian, and the suggestion is he’s potentially at the middle of a deal.

Player on ‘top of list’ at Arsenal, has affordable release clause...