Chelsea have already started to shape their squad for next season by agreeing deals for Hakim Ziyech and Timo Werner.

This week’s edition of SportBild claims the Blues are interested in Kai Havertz and are ‘ready to pay’ a ‘mega fee’ to secure the Bayer Leverkusen star’s services.

The Germany international wants to move elsewhere and he will communicate that to sports director Rudi Völler shortly. He will officially ask for approval to leave the club this summer.

It’s claimed Frank Lampard’s side have ‘more millions’ to spend even after completing deals for Ziyech and Werner.

The Bundesliga side are demanding €100m for the attacking midfielder, and a ‘poker’ could be conducted by splitting the overall figure into fixed fee and variables.

There’s belief Leverkusen would accept, a fee of €70m as an immediate payment plus €30-40m in bonuses.

SportBild makes it clear a ‘prerequisite’ for Havertz to join Chelsea is that they qualify for next season’s Champions League. Following their 3-2 win over Crystal Palace on Tuesday, Chelsea climbed to third spot and are one point ahead of fourth placed Leicester City.

The report also adds Lampard has described the attacker as a ‘top player”. 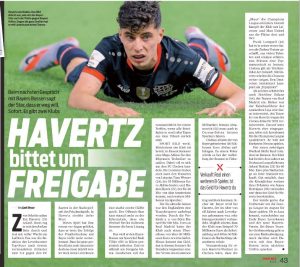 Bayer are in contention to win the Europa League this term and Havertz wants to represent his side in the competition, even if he agrees to join another club.

Should he seal a move elsewhere before the Europa League restarts in August, SportBild state Leverkusen and his new club will decide if Havertz will be allowed to feature in the European competition.