On July 19th, Liverpool paid a reported fee of €72.5m to AS Roma and made Alisson Becker the most expensive goalkeeper in the world, and the record was broken in less than a month when Chelsea paid €80m to sign Kepa Arrizabalaga from Athletic Club Bilbao in August.

Before the start of this calendar year, the 23-year-old was linked with a move to Real Madrid and the stopper ended the speculation in January by signing a long-term deal with the Basque club.

Since joining the Blues, he has four starts this season and has also been included in the Spain squad for the international fixtures against England and Croatia.

While he prepares for La Roja’s upcoming games, the west London club’s custodian sat down for an interview with Spanish newspaper AS. During the course of a lengthy interview, he explained what convinced him to sign for the FA Cup winners, despite reported interest from Real Madrid and Juventus.

“It is a great club, which in recent years has won the Champions League, Europa League and the Premier League… It’s a team with great players. It was an important bet and I am happy to take this step, I want to enjoy it,” Kepa said. 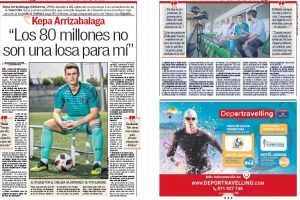 “I started the pre-season with Bilbao and it was several weeks, Chelsea showed their interest. There were talks and everything was carried out. I’m happy for all the effort that Chelsea has made because it’s not easy to pay those amounts and I’m looking forward to returning it on the field.”

Some in Spain feel Kepa should be given a chance as Spain number one after David De Gea’s difficult World Cup.