Home Premier League Chelsea Chelsea man will be sent back to Stamford Bridge this summer –...
SHARE

Portuguese newspaper Record features today a piece about the loanees who have been at Porto this season, with one of them being Malang Sarr, who arrived from Chelsea for the campaign last summer.

The defender is considered to be one of the players who has no chance of staying with the Dragons for longer, meaning his move back to the Blues is ready to happen.

Sarr made 18 appearances for Porto’s first team this season, most of them still in 2020, and there’s actually something peculiar about his spell, as Record says he became an important player for the reserve squad.

The newspaper points out that Sarr started the last eight games of Porto B, and should now take on a final challenge in the match against Benfica B at the weekend. 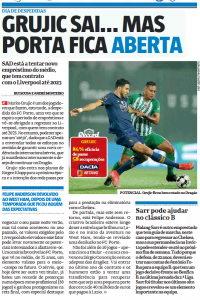 So even though most Porto players will finish their season tonight when the Dragons face Belenenses in the Liga NOS, the fact that Sarr is in the reserve squad means he’ll have a few extra days with the club.

Chelsea signed Sarr on a free move from Nice last summer and immediately sent him to Porto.

The defender has a contract with the Blues until 2025, and it’s still not clear what the club’s plans for him beyond the current season.