Eden Hazard and Thibaut Courtois are pushing for Real Madrid to sign Chelsea’s N’Golo Kanté next summer, according to a claim from France on Monday.

The French midfielder has become one of the best in the world since joining Leicester City in 2015 and has only further added to that status during his three-year stint in London.

He remains a crucial player for Chelsea under Frank Lampard and has a contract at the club until 2023, but recent reports have suggested Real Madrid may come calling sooner rather than later.

Madrid’s midfield needs a revamp, something they tried to achieve with their pursuit of Paul Pogba this summer, and the rumours have suggested Kanté is a player they are keen on.

And it seems two of his former teammates are determined to make a transfer happen as well.

France Football report that Eden Hazard and Thibaut Courtois are pushing to convince those in charge at the Bernabeu to make their move next summer. 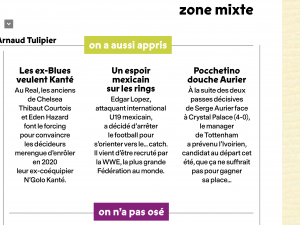 Both players know first-hand how good Kanté is, having won the Premier League and Europa League alongside him during their time at Chelsea, and are seemingly working hard to be reunited with their former teammate in Spain.

Of course, Madrid won’t need any recommendations given the reputation Kanté has earned himself, but it may just be that the opinion of their current stars could sway their decision making over what would be an expensive transfer for them.