Move over Liverpool, it’s Chelsea and Manchester United who are interested in Stefan De Vrij now.

This is, at least, what Corriere dello Sport are reporting on Wednesday, as they go through the list of teams interested in the Dutch centre-back, who recently entered the last six months of his contract with Lazio.

The Reds were the most linked over the first half of the season, which we assumed was a backup plan for Virgil Van Dijk, and while that hasn’t been confirmed, the fact they’ve slowly drifted out of the rumours could suggest that was the case.

However, the fact there’s a potential free deal here has attracted a few clubs, and it isn’t the first time we’ve seen Antonio Conte’s and José Mourinho’s sides linked with the Lazio defender. 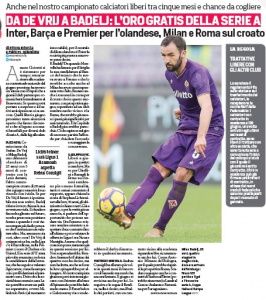 Back in early 2017, Manchester United were said to have reached a ‘pre-agreement deal’ with the Serie A side for De Vrij, one they clearly never went through with, whereas Chelsea were looking at him prior to their purchase of David Luiz.

While centre-back isn’t a priority at Old Trafford, the long-term futures of a few options at the club have been questioned a few times.

As for Chelsea, the very same David Luiz Antonio Conte bought instead of De Vrij is now on his way out, meaning a new face could be on its way to Stamford Bridge.

We won’t take all of this too seriously right now, but if they keep cropping up, with different sources constantly mentioning them (we’re now on two when it comes to Manchester United), then maybe, just maybe, De Vrij could be set for the Premier League.