Home Premier League Chelsea Chelsea man back on radar – Previous negotiation has ‘made the road...
SHARE

Inter Milan have turned their attention back to Chelsea striker Olivier Giroud as they hunt for a striker this month.

The Italian side are making big moves, with Antonio Conte adding to his squad as they look to continue their Serie A title push.

Adding a striker to the squad is one of their wishes, and according to Gazzetta dello Sport, the choice is between Giroud and Napoli’s Fernando Llorente.

However, Napoli are not keen on letting Llorente go, and that stalemate ‘pushes the Nerazzurri radar’ back to Giroud. 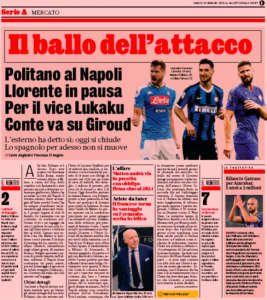 Inter had been in negotiations with Chelsea for the Frenchman for most of this window, but it appeared he had been pushed to the ‘second-row’ as the Italians looked at other targets.

He is back on the agenda, though, and Gazzetta say that the quick negotiation Inter made with Chelsea for Victor Moses has ‘made the road more downhill’ to securing Giroud.

Giroud is open to the move, and the two clubs are not far away on price, but Inter will have to ‘give the gas’ to get the deal over the line.