Wednesday saw Chelsea’s hopes of signing Achraf Hakimi largely die, as both the French and Italian sport media insisted PSG were set to win the race.

Inter Milan need a big sale this summer and the fullback was quickly chosen as the man who would be leaving, largely because he was receiving serious transfer interest.

Chelsea and PSG then set out to battle for the player, and the French side are said to be the preference of both the player and his wife.

Thursday’s edition of Gazzetta dello Sport reports Hakimi’s wife is an actress and often works filming in Paris, so a move there would be good for the family.

That hasn’t stopped Chelsea from making a last attempt to snatch the signing from PSG’s grip, an attempt which the Italian newspaper describe as ‘desperate’… not to mock it, but more to describe the late nature of the new approach. 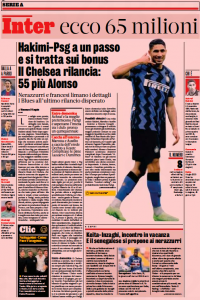 Chelsea would be willing to pay €55m plus Marcos Alonso, which they say totals €65m. According to the Gazzetta, there would be the possibility of the Blues paying a straight €65m for Hakimi, and then Inter sending €10m back for the Spaniard.

Still, PSG are thought to be very much in the lead, and a deal could be concluded soon.