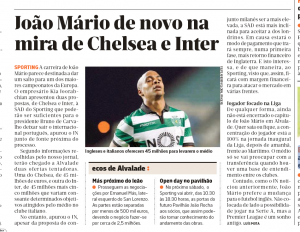 According to Jornal De Notícias, the agent Kia Joorabchian is the one who delivered the bid, along with another offer from Inter Milan of €45m + €5m in bonuses.

Despite Chelsea’s bid being lower, the newspaper says that Sporting would prefer to accept it, since it would mean a bigger amount to be paid up front.

The article doesn’t explain if Inter want to pay the €45m in instalments, but you’d have to assume so going by the Chelsea preference.

The player prefers a move to the Premier League, just like has been reported many times before. But Jornal de Notícias says he’s totally focused on Sporting right now and will only worry about the bids after the clubs reach an agreement.

This morning, there were also claims in Portugal saying that Liverpool had offered money plus Mario Balotelli in exchange for the midfielder, but the Italian striker isn’t in Sporting’s plans.

That came after claims from the player’s own father that Liverpool had submitted a €40m offer earlier this summer.