Home Premier League Chelsea Chelsea have made ‘enquiry’ for old flame – Once offered €40m for...
SHARE

Bringing back Kenedy from Brazil out of desperation, Chelsea are still what you would call short at left-back these days.

The winger, who can also play wing-back, will likely be used to rest Marcos Alonso if needs be, but there’s no denying the Stamford Bridge side could do with someone more natural for the backend of the season, having also used Malang Sarr there.

Borna Sosa was looked at in Germany, but there are now echoes coming from Italy suggesting an old flame has been reignited: the one for Alex Sandro.

The news comes from Gazzetta dello Sport, who, when talking about potential exits, mention ‘another enquiry that is more interesting’ is that of ‘Chelsea for Alex Sandro with Juventus’. 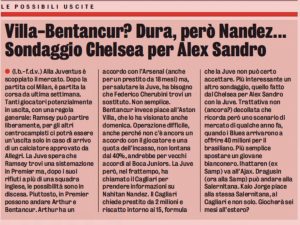 As things stand, ‘negotiations haven’t taken off’, but they do add a ‘yet?’, suggesting something could certainly develop if the answer from the Serie A side was positive.

They then recall ‘a market scenario of a few years ago, when the Blues came to offer €40m for the Brazilian’, a figure that probably won’t be reached this time, considering the player is now 31 and only has 18 months left on his contract.

Still, it seems Chelsea are thinking about it, and have around five days to do something.